There are a number of important rituals around death in Judaism. As soon as a Jew hears of the death of a loved one, they make a tear in their clothing to show their grief. This action is called kriah and it is as a symbol of loss and grief.

Upon death, the body is washed and prepared for burial. In the days before the funeral, the body is not left alone.

In Jewish tradition, burial should happen as soon as possible after death. The coffin should be simple to show equality, and the burial ceremony takes place at a cemetery, not in a synagogue.

Funeral services include prayers, psalms and a eulogy. Families are encouraged to erect a gravestone so that the dead are not forgotten.

A person who was a close relative (a parent, child, sibling or spouse) of the deceased becomes an onan whilst awaiting the burial. Out of respect for the deceased person, the immediate relatives must be fully focused on the burial of the person who has died, even if they are not involved in making burial arrangements.

The Kaddish is prayer for those who mourn. It is traditionally said by the closest male relative to the person who has died on the day of the death. Many Jews feel that the act of saying this prayer helps people to focus on God at a time when they may feel far from him.

The role of Chevra Kaddisha

Making sure that a Jewish person has a proper burial is not only an act of kindness, it is also regarded as an honour and a sacred duty.

Chevra kaddisha means ‘sacred society’. The is the voluntary group that has members worldwide, performing the final rites for Jewish people. They work with funeral directors, cemeteries, hospitals and families to ensure that the persons death and burial fits with Jewish teachings and customs. Their work often starts with visits to a dying person. When the person dies they will continue to be involved in the burial and the mourning which follows. 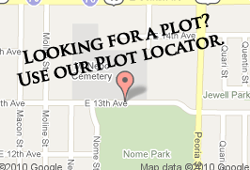 Hours:
The gate is open daily from 8am until one hour before sunset.  Cemetery is closed on Saturdays and Jewish Holidays.